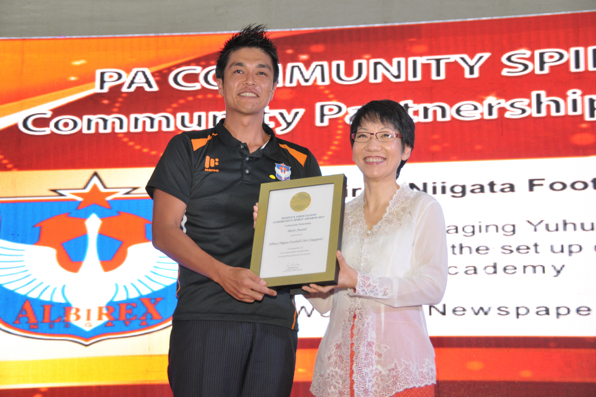 ■Collaboration with Yuhua
Albirex Niigata Football Club (Singapore) has signed a Memorandum of Understanding (MOU) with Yuhua Community Sports Club (CSC) annually from 2013.
As part of the MOU, Albirex Niigata Football Club (Singapore) will donate S$1.00 for every fan who attends our home matches at the Jurong East Stadium during the Singapore League matches.
In total, a sum of S$17,395 was raised in 2014 (over 15 matches), while S$19,386 was raised in 2013 (over 16 matches).
With this donation, Albirex Niigata Football Club (Singapore) and Yuhua CSC launched the Yuhua Albirex Football Academy (YAFA) in August 2014 to provide children with a platform to develop their football skills and learn life values through football.
The above-mentioned activities were recognised by the People’s Association and enabled us to receive the award.

■Comment from Daisuke Korenaga
Albirex hopes to establish itself as a pillar in the community to develop a sporting culture in Singapore.
It is important that we implement a “Community Sports Circulation System” that can create a strong bond between the community and sports.
I am very honored to receive this award and be recognised for activities that go beyond sports.
As a sports club originating from Japan, we will continue to contribute and strengthen the relationship between Japan and Singapore by conveying the splendor of Japan through sports.